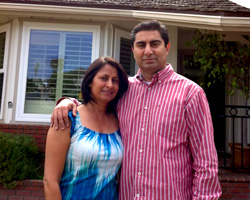 On June 11, 2011, Suraiya and Irfan Ali hosted a Dessert Party in honor of Shaheena at their place in Rancho Palos Verdes. Quite a few of Suraiya’s and Shaheena’s mutual friends were there to pay homage to Shaheena.  Shaheena’s parents were invited as well and were asked to give a brief presentation about the scholarship program “Shaheena Karimi Excellence through Service Award” being established at Barnard College.  After the presentation, everyone was quite excited and wanted to know more about the program.  It was announced to all that the program was officially launched on July 11, 2011.