Shaheena Karimi was born on November 30, 1977 to Nizar and Shahida Karimi.  A younger brother, Habib, was born two years later.

Shaheena was born a healthy baby and enjoyed her childhood illness-free until 1984. At the age of 7, she began having asthma attacks and within a short period of time, her condition elevated to the point where she became dependent on steroids to control her asthma.

Unfortunately, her health deteriorated rapidly and frequent visits to the emergency ward became a routine.  She and her family moved from Los Angeles to Phoenix to see if a different climate would improve her health.  However, her health worsened and she was taken to the National Jewish Center for Immunology and Respiratory Medicine in Denver, Colorado – a top rated hospital for treatment of chronic asthma. She was admitted and stayed there for over 6 months, after which she and her family returned to Los Angeles, where she lived for the next 25 years.

Countless visits to the ER, hospital stays for days at a time, and other episodes that put her in the hospital for months, was part of Shaheena’s life. Because of the high dosage of steroids to manage her asthma, she developed osteoporosis. She also developed muscle myopathy (weakness of muscles). She took many medicines on a daily basis and it was amazing to see how she functioned at times.

Yet, she did. In fact, Shaheena more than functioned; she succeeded.  She was a determined young woman whose positivity was contagious.  Despites having to be occasionally tutored at home, or attending high school in a wheelchair, Shaheena always kept pace.  She was resolved to not fall behind in life. 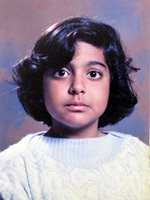 After she graduated from West Torrance High School, she went to Barnard College, Columbia University.  Despite continued visits to the hospital even while in New York, she graduated on schedule.  During her four years, Shaheena made lasting friendships, impressed her professors, and served her community through various organizations on campus.

After graduating from college, Shaheena returned to Los Angeles where she had another bout with spinal fractures. After taking two years to recuperate, Shaheena immediately went back to school and earned her master’s degree, while working part-time. During these years, she had a very active life.  In addition to working and going to school, Shaheena was also involved in her community, and tutored high school students assisting them in college admission.  This active lifestyle allowed Shaheena to express her passion for volunteerism and education. 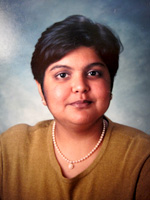 Six years later, in early 2008, her illness started to gradually worsen to a point where she began feeling sick again. Despite her worsening condition, Shaheena fulfilled her commitments with zeal. She did not let her sickness define her.  In early 2009, she developed epilepsy and a seizure disorder due to the long intake of medicine over the last 25 years.  She fell during one of the attacks and fractured her spine again.  With a fractured spine and multiple seizures and asthma attacks over the course of a day, Shaheena struggled and worried about her future.  In the face of such adversity, she made the decision to go back to school, and began studying for the GRE and researching graduate schools.

Although she was determined, Shaheena also knew that this time, her recovery was harder and longer.  Yet, she continued to hope and pray that once again, she could live an active lifestyle filled with all of her passions.

On the night of her 33rd birthday, while recovering from her most recent debilitating illnesses, Shaheena’s heart stopped and she passed away peacefully while reading one of her favorite books.

Throughout her life, Shaheena mounted amazing accomplishments, without letting her daily struggles get in the way. She faced all adversities with a strength and optimism many of us can only imagine. Shaheena also used her strength and optimism to help others.  In fact, one of Shaheena’s long term goals was to set up a scholarship at Barnard College.  She cherished her four years in college, and appreciated all that Barnard did to support her throughout her illness. She often suggested that someday, she would give back to Barnard for all that they gave to her.

After Shaheena passed away, her family and friends got together to raise funds in order to start a scholarship at Barnard in her honor. As a result of that effort, an endowment of $100,000 was established in Shaheena’s name at Barnard College of Columbia University in 2013. We hope that this scholarship will not only help keep the memory of Shaheena alive, but also help us to be part of Shaheena forever.

Learn more about the service award